Yes another entertaining day at the track.

And to some extent Phil Bach’s idea is still working. The catered lunch..under tent

Phil was a Charter Member, and an Executive Chef….so for the last 12 years or so….ZROC shows the Vintage Car Community how it’s done. Lots of folks lined up for the Parade Lap….we’re looking on, asking l How much lunch?”

Andrew Doll, as the race commentators referred to him over the load speakers, posted a first in class 6 overall in the Saturday Enduro. There were two other Datsuns running over the weekend, a nice 240 and a BRE 510. Bill Barton placed his German born entry too….but you’d have to belong to the PCA….to get those details .

Steven Padavana won a Blue ribbon for “Best Contemporary”. Seems .that since it was for the 300ZxTT he felt that the award should “ride low”….to each his own

More fun to follow in a few weeks at the Arthritis Auto Show.. 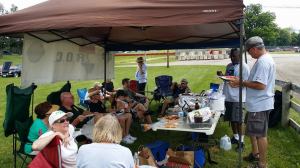 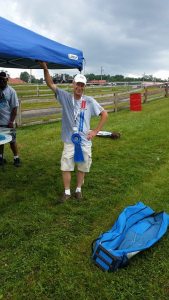